Please pardon the delay, I was enjoying some of the fine European weather in the French Riveria and neglecting my TROOPERS blogging duties. As promised, here is a short description of my day 2.

Starting early in the morning for the annual 10k charity run up the Philosopher's Way, a large group of brave (and sleepy-looking) souls donned very bright orange tee-shirts and headed out into the cool, but thankfully sunny morning. After a quick run and some drone photographs, we hurried to have a shower and breakfast before Mara's day 2 keynote on some of the challenges facing cyber policy. I don't want to attempt to offer my take-aways out of concern I will mis-characterize something as I am far from a policy guru.

Up to the third floor for Kelly's talk on behavioral game theory and how it can be used in cyber-security. It was very interesting to see how game theory, behavioral economics and security are blending, and Kelly's discussions on the strategies were a useful perspective. Coming from the mathematical side (having to derrive and prove various game-theoretic algorithms in my graduate studies), seeing the practical uses of the technology was very valuable.

Following Kelly's talk, I sat in on the Intel ME reversing talk, which was about laying some of the foundational work into discovering the inner-workings of Intel's secrective co-processor. In short, very little is known about this, except by the two Intel employees at TROOPERS who were I think enjoying watching the REs struggle while they had full source code access.

The surprise speaker that was the hot talk to attend was a session by The Grugq, a mysterious twitter personality who sent a stunt-double to Heidelberg to regal us with musings on nation-state cyber and how the behaviors of each nation's cyber teams are a reflection of the workings of each state's culture.

After a short break, Mike Ossmann and Dominic Spill took the stage adorned in very entertaining LED glasses to discuss a new module for the greatFET to manipulate infrared much like the HackRF does for radio. They discussed a number of products that use that, as well as some of the challeges they faced with designing the new hardware.

Finally, it was time to close yet another year (the 10th!) of TROOPERS, with a nice ceremony marking the changing of the guard, as Enno is relinquishing his role as TROOPERS host. All in all, another great year of TROOPERS, hope to be back next year! 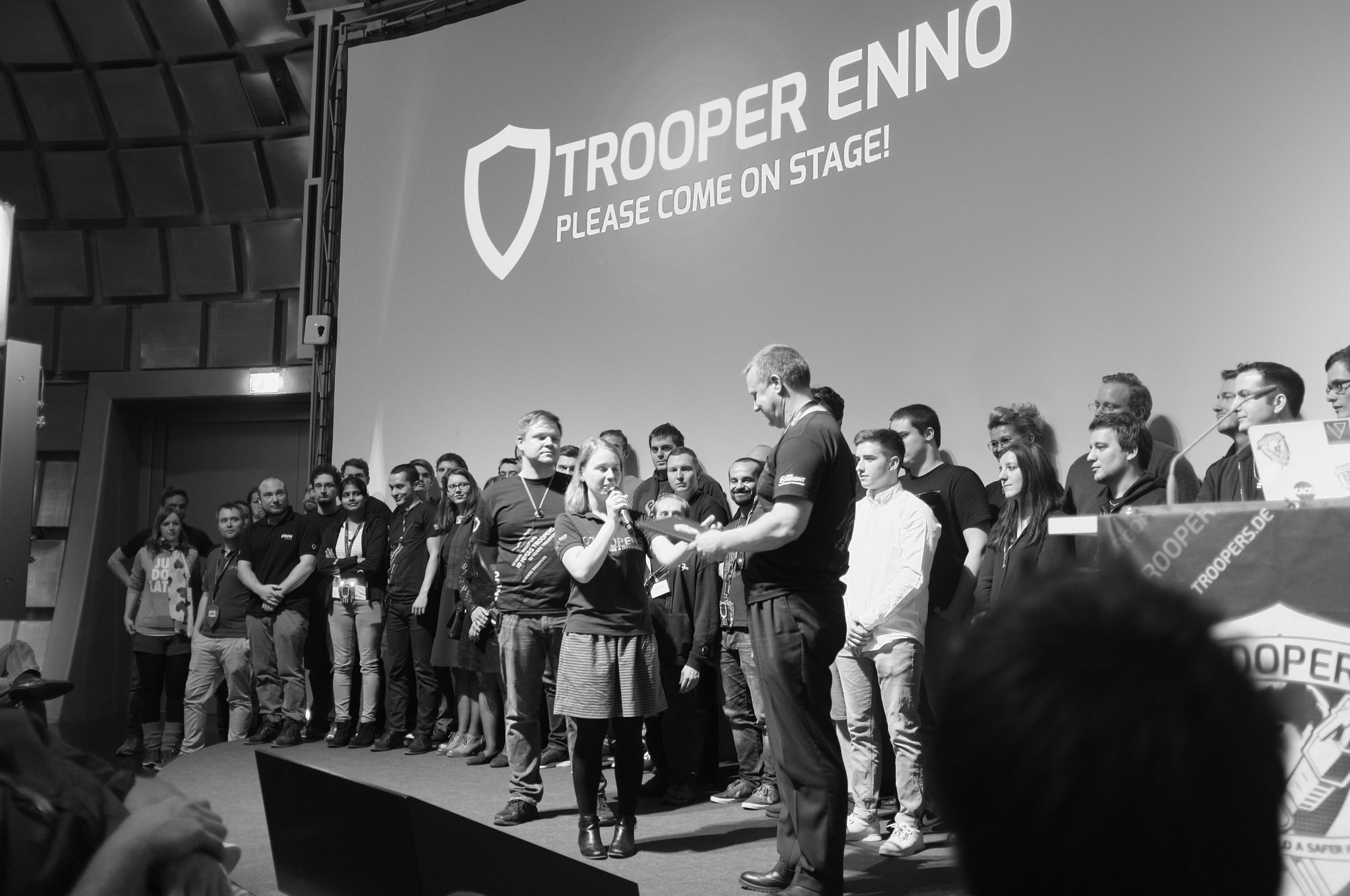